The Smell Of A Good Nugget

Reservoir Mum really does seem to cop the full blast of Lewis’s toddler-inspired lack of etiquette. Fresh on the heals of being mortified by his Muslim counting episode she found herself in the overcrowded interior of a Macdonald’s restaurant with Lewis by her side eating a hearty meal of 17%-real-imitation-chicken-flavour Chicken McNuggets.

Reservoir Mum isn’t a big fan of MacDonald’s – the rainforest clearing, animal soul devaluing, corporate greed beserking, child brainwashing, smarmy bastards! – and was there only to meet a work colleague. (I feel the same way about Maccas a lot of the time but, occasionally, when I feel very hungry and need a bite real quick I think Macdonald’s is a very yummy restaurant with a nice interior and a great record for socialising fat, slothful teens who are trying to avoid low to moderate to high intensity activity.)

Anyway, she was feeling a bit out of place, a bit self-conscious and a bit observed even before Lewis, yelling to be heard over the Macdonald’s chatter and clatter, said,

“Mummy, can you smell my pop-off?”

Reservoir Mum’s extremities tingled and her face flushed with embarrassment as she whispered forcefully, ‘Lewis! That’s just the way the nuggets smell here.’ 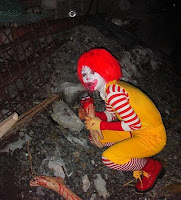 She was convinced that everyone was looking at her with a pierced glare, thinking what a terrible mother she was. What else would all the upper class, high-flying Macdonald’s restaurateurs be thinking? I mean, she was eating food in Macdonald’s for Christ sake and not only that she was forcing her children to eat their terrible semi-food products as well. And to top it off her three-year-old was a little filth muppet who made her smell his bodily emissions.

Trying to avoid any further mortification, Reservoir Mum tipped some water into the small amount of Coke Zero left in the Macdonald’s cup and gave it to Lewis to keep him quiet, hoping to fade into the chatter and clamour around them.

“Thank you Mummy bum-bum!” Lewis said, loudly, as he took a little sip. “MMMMM. Yum! This tastes like beer. I love beer!”

I told her that at this stage I would have stood up, kicked over a chair and yelled, “I am a good parent you fuckheads!” spraying Quarter Pounder and spit at them for good measure but she didn’t really think that would change their opinions on her ability to Mother effectively.

‘If David Sedaris had got married and had kids, he would have been Reservoir Dad. Fall-on-the-floor funny, sharp, witty and just a little bit sexy.’ ~ Kerri Sackville, Best Australian Blog 2013 judge

A sharply funny, fresh and irreverent chronicler of real life in today’s parenting trenches, Reservoir Dad is a stay-at-home dad whose award-winning blog has already won hearts and minds all over Australia and beyond for telling it like it is and making us laugh out loud – and sometimes cry, but in a good way.

I fell into this blogging thing but now see it as that crucial cog in the machine. Blogging offers me a great creative outlet with an immediate audience. It freshens my perspective. Reliving my time with the boys, recording our last pregnancy and the birth of our fourth child and dancing around the intimate moments of my relationship with Reservoir Mum acts as a time capsule for my family, adds a little extra to my world, and reminds me of how good I've got it. A hard day at the office becomes a learning experience in retrospect, a chance to colour the most difficult moments with a touch of the crazy, something to savour, something to reread later with the boys on my lap.

Smelly Butts and Bullies and…

How To Turn A Steering Wheel Into A Pretzel